Last year i got a copy from the Back On The Streets! album by Aggressive Combat, a Basque band who bring back the No Mess, No Fuss sound from the 80ies. I was immediately enthusiastic about their music and recently i did an interview with the band to give them the oppurtunity to introduce theirselves. All questions were answered by Mara (vocals).
April 2015 – band website

The usual question. Can you please introduce the band?
We are a streetpunk/Oi! band from the Basque Country, exactly from the town of Arrasate / Mondragon. The current members are Sid (Bass), Nebado (Drummer), Harri (Guitar) and I, Mara (Vocals).

We started with the band in 2004 when we were 16-17 years old kids with 5 members band, with Iurgi and Arnaiz still on guitars. Last year we celibrated our tenth anniversary and we still hope to celebrate at least 10 more years.
We also have to give thanks to another Aggressive Combat member Iñaki ‘Virus’, who played guitar with us when Arnaiz left the band.

Last year you released the Back On The Sreets! album, how were the reactions?
We are really happy with our work and with the reactions of the people, but of course as the times goes by we see some things we wanna change for the better, but at least we’re happy with Back On The Streets.

Back On The Streets! is just your second full-length in ten years. Are you slow songwriters?
Well, as you could see we do things very slowly, but there are several reasons for it. When we recorded Etorkizun Iluna, our first full-length album, we started to play a lot of gigs mainly here in the Basque Country.

A couple of years years later we recorded an EP called Survive. Those two works were recorded with the original line-up featuring Sid, Nebado, Arnaiz, Iurgi and me (Mara), but shortly after the release Arnaiz left the band. Although we didn’t recorded we continued writing songs and playing songs.

We also recorded a cover from a traditional Basque song called Xalbadorren Heriotzean wich was released on the Txarrantxa Rock. We recorded this song as a four-piece band.

After some years playing lots of gigs Iñaki joined the band and we decided to take the new songs and to make another full-length album. 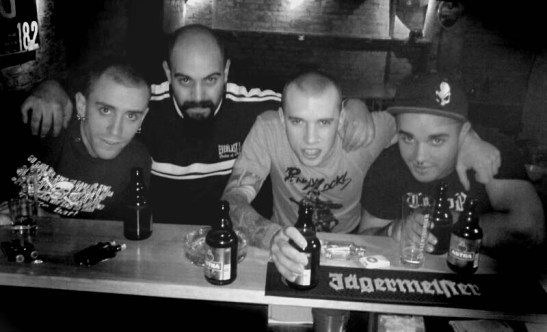 Many punk & Oi! bands i know from the Spanish State are heavily influenced by metal music, yet your music sounds more like the British Oi! from the 80ies…
Since the early years of the band we play covers of all those old British Oi! bands like The 4 Skins, Blitz, The Business, The Last Resort and many more. We can say that those bands are the main reason why we’re playing this kind of music and of course it’s our main influence, so it’s great for us to hear you saying that we sound like them.

Did you played many abroad gigs of mainly in the Spanish State?
I don’t know if it’s the same for every band, but for us the most difficult thing is to fix up the dates, cause we use to work in different things and some many times we can’t play cause of work problems. So if we want to go abroad it’s even harder.

I think, nowadays with internet and the social nets is easier to get in touch with people from many different countries and if they’re interested on doing something or playing a gig it’s easier and faster than years ago. By this way we’ve played in countries as Germany, Czech Republic or France, and we hope to play in many more someday. 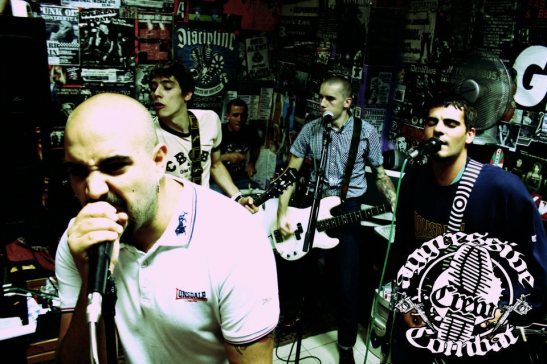 You are an outspoken Basque band. Does it ever give trouble at gigs elsewhere in the Spanish State?
Well, first of all we’ve to say that we are Basque and we are proud of our history, heritage and our culture. We believe that every country has the right to choose what they want to be and we don’t hide that we would like to see a free Basque Country. We have to say that until today we haven’t had any problems in our scene and we got good relationship with people or bands from different parts of Spain or France.

Since a few years the Spanish States is suffering from the crisis and has a huge unemployment. Does this influence the number of people at gigs?
Yes, the crisis has hit hard here. Some of us and a lot of people around here are unemployed so they can’t go to gigs every weekend as some years before. The attendance is lower nowadays but I don’t know if the reason is economical or that the young people like another kind of music. There’s also a lot of good people, young and old, who spend the few money they have coming to our gigs and it’s something we really appreciate.

What are your future plans?
Of course we got some future plans, we recorded two songs during Christmas two songs for a split EP with our Galizian brothers Skarmento and we’ve started writing some new song for a future release, but we don’t know when it will be recorded or released. We’re also looking for some future gigs. All the band members have also different parallel projects as Hawking Thugs, Gaupa Heroes and Drop! but we’re still alive!

Do you have any closing comments?
Thanks for your interest on us. We would like to say to all the people who want to see Aggressive Combat playing in their bar, town or area can keep in touch with us via e-mail (aggressivecontact at gmail dot com). Cheers & Keep the Spirit Alive!!

Aggressive Combat – Back On The Streets LP

This entry was posted on April 20, 2015 by oioimusicdotcom in Interviews and tagged basque country, Oi!.