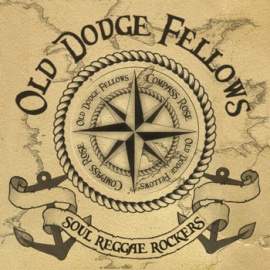 Old Dodge Fellows are a new band consisting of ex-members from French reggae bands like Upten and Soulinvader. The band balances between reggae and soul with some winks to early dub as well as rocksteady. No hodgepodge, the members are too experienced for that, but smooth and tight reggae.

The female vocals along with the keyboards and bass guitar create a pleasent athmosphere which lead the songs in the right direction. Especially Gaelle’s vocals give the band a more soulfull sound. The band sounds a bit like a more soulfull version of Candy McKenzie (yet without the over the top echo on the vocals). But comparison made with Gregory Isaacs or Alton Ellis makes sense as well.

I’m not sure if this single is meant as a teaser for an upcoming album or not, so i don’t know if this 7″ features exclusive songs. But the quality of the songs Compass Rose and Every Waking Day along with the cut-out jacket will surely satisfy the vinyl collectors.

This entry was posted on May 4, 2014 by oioimusicdotcom in Reviews.