The Welsh punk veterans Foreign Legion just released a new album and are heading for their thirty years’ existence. Judging by the musical capicities of the band i think Foreign Legion is an underrated name in the scene. I had a chat with vocalist Marcus about the past, the new album and their upcoming anniversary.
November 2013 – band website

I always wondered why a Welsh punk band is named after a French army division…
It was a cold morning in december 1983. The Dead On Arrival boys met at the station cafe for a band meeting. We needed to change the name of the band because on some shows we were announced as DOA which are also a great Canadian band.

We looked out of the window and we saw the train station, which is the last stop on the track Valleys line. We just said we foreign to the rest of the United Kingdom, then we just added the Legion to it. Foreign Legion were formed on march 1st in 1984 and we are still going working hard today in 2013.

I won’t ask you to sum up the complete band history, but can you shortly explain the motivation behind the splits and reforms of the band and are there still any original members in the current line-up?
It was in the summer of 1992 when my grandmother passed away and i had some other personal problems. Some of the band members wanted to move away from the punk and Oi! side. So we just called it a day. Although we were still putting new tracks down on studio tape we didn’t do any live shows. It wasn’t until seven years later – in 1999 – when started doing live shows again.

Our current line-up is me (Marcus) on vocals as original member and Steve Zuki on bass / vocals, Sid Lovely on drums and Si Legion on guitar and vocals. 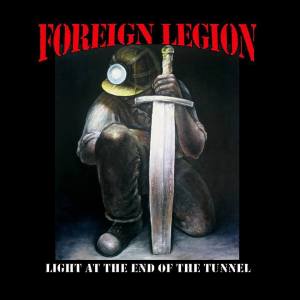 The cover artwork as well as your song Miners deal with the hard life of miners. These days all larger Welsh mines have closed down. So perhaps you can explain where the album title ‘Light At The nd Of The Tunnel’ reffers to?
Light At The End Of The Tunnel is meant to give hope and strength to all the working class people all over the word , that the shining sword ..
We all are from mining towns abd many people in our families were miners. We went through hell during 1984/1985 with huge strikes, no money, no food. The Tories smashed our towns and people lost their jobs, but we are still smiling to this day

During the years you played with hundreds of bands and in hundreds of places. Looking back, which gig has been the most memorable? Is there any country of place you never played and you always wanted to play?
We really enjoyed the 100 club shows in London and the CBGB’s gig on new year was so special for us… We really enjoyed all shows. We made fabulous trips all over the world, met lots of friends, bands, promoters, fanzine writers etc etc. The Oi! & punk scene is just one big happy family punk oi scene. Gigs with bands like the Dopkick Murphys, Cock Sparrer and Joe Strummer were very special nights. 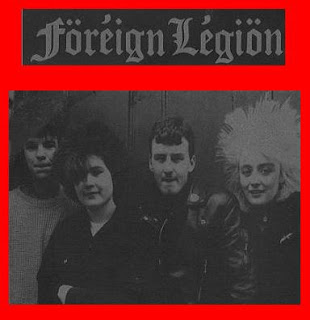 You were established in 1984, so next year you’ll have your 30th anniversary. Does the band has any special plans for it yet?
Yes, thirty years in 2014. We hope to do lots of shows in the UK, Europe, USA… We’re going to to record a new EP and we hope to reissue some older releases again.

Do you have any closing comments?
Thanks to all our fanzines, labels, mates, bands,promoters all over the world… You know who you are!
Cheers Paul and best wishes with your label Aggro Beat Records.

Click at the image(s) to purchase band releases from Aggroshop.com
Foreign Legion – Light At The End Of The Tunnel LP

This entry was posted on November 3, 2013 by oioimusicdotcom in Interviews and tagged England, Oi!, punk.