Dead End Street is a new band from Italy founded by (ex)members from bands like Colonna Infame and Payback. The band plays streetrock’n’roll inspired by the likes as Rose Tattoo and The Business. This week the band released their selftiteld debute EP so i catched up with Damiano (guitar and vocals) for an interview.
September 2013 – band website

Please introduce the band to us…
We started in 2011 just as a side project because all of us were playing in different bands. After a few rehearsals we realised we were having too much fun, so we wrote some more songs and started playing some gigs around. In the beginning it was me doing vocals and guitar, Mattia on drums and Gianluca on bass. Later Francesco joined us on second guitar.

You just released an EP, can you tell a bit more about it?
Our debut 7″ contains four songs: One Beer, Two Shots, Dead End Street, Outlaw and Can You Hear Me?. The songs were recorded by Fluvio Glerean at Overload Studios in Rome. We recorded the songs live, playing all together. Later we just added vocals and guitar solos. Old school!!!

The artwork for the EP is just great!
Heinz from Psycho Tatto created our cover artwork. He’s a good friend of mine and we’re proud of what he did!!! We just told him what we wanted and he did all the rest, he’s a great tattoo artist! Thanks bro!!! 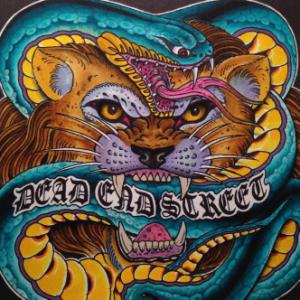 The song Dead End Street reflects a critical view on the place you grew up. I know you moved to the countryside of Italy a few years ago, has the song anything to do with this?
Yes, that song is critical but at the same time is a little bit nostalgic… it talks about the way i grew up in Rome and how i tried to be a better man every day. Rome is a cool place when you’re young, but you have to be careful because some behaviours can ruin your life like a cancer. I think it’s just a matter of age, there’s a time for being wild and a time to be wise. Or at least you have to try!

Damiano, i know you also play in a few other bands. Can you tell something about these bands and how do you manage to have enough time for everything?
I used to play in many bands: Colonna Infame, Strength Approach, Bierkampf, Payback… different bands but same spirit, every experience gave me so much and helped me grow as a man and “musician”. I think i was a lucky boy, i had the chance to see so many places and meet so many good friends all around Europe. Very lucky, especially if i think about my old friends from the neighbourhood who never moved from the same old bar. I can say punk rock music really saved my life!
I try to do my best to manage all the bands, but it’s very hard, i ain’t got so much time right now and i’m more lazy than before !!!

I suppose everyone knows Italian bands like Klasse Kriminale and Los Fastidios by now. Could you name any other bands which are worth listening?
There are so many good bands around, like Pinta Facile, Gli Ultimi, Plakkaggio HC, Grand Theft Age, Poker, Giuda, Shots In The Dark, Favl, Bomber 80 and Attaccabrighe… Too many to tell!!! Back in the days it was very hard for an italian band touring around Europe, now things are changing, i see so many young bands doing DIY tours and it fucking honours me!!!

Do you have any closing comments?
We as a band would like to say THANK YOU to Aggrobeat and Hellnation for believing in us and i really hope this 7″ will be just the beginning!!!

If you want to get in touch with us, or you want us to play in your city, your club or your kitchen, please send us an email at scarred13@hotmail.it or look for us on facebook!!! Thanks guys, keep the faith!!!

This entry was posted on September 26, 2013 by oioimusicdotcom in Interviews and tagged Italy.