Shortly after these Swedish released their debute album they weigh in with a new EP. Although the Saints are a young band, some people might know them yet as drummer Magnus has a long history in punk music as the former drummer of Perkele. 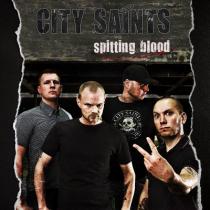 When i listened to their debute album i was already amazed by the high level of rock’n’roll influences. While playing the new songs there’s one band that constantly crosses my mind: AC/DC! Magnus’ drumming reminds me a lot to the simple and direct way of drumming Phil Rudd and Chris Slade and when i play Flame Of Fire on the flipside i almost assume i hear AC/DC’s TNT! The other song on the flipside, Lies, has some early Status Quo vibe.

Make no mistake, without any doubt this EP can be filed under Punk, but judging by their sounds the Saints are willing to look beyond the borders of a sometimes reticent subculture. The EP is released on blood red vinyl in a limited printrun of only 250 copies so hurry up!

This entry was posted on July 31, 2013 by oioimusicdotcom in Reviews.