Throughout the years many bands promised to play Rose Tattoo influenced streetpunk, yet The Corps are one of the few bands to live up the promise. Streetpunk attitude, a rock ‘n’ roll guitar sound and an excellent voice are ingredients which make these Aussies one of a kind. Questions were answered by Will (bass) and Bevynn (guitar).
June 2013 – band website

You guys all have a different musical background. how did you guys met and how did you started the band?
Will: Alex, Jordan and I used to play in a really bad metal band, we had no clue what we were doing! Because we weren’t very good it didn’t go well haha. At some point Alex started recruiting people to do a street punk band influenced by English Oi! and after a bit of chopping and changing managed to put together a stable line up, including Jordan. I think I remember he asked me to play and I said no because it didn’t interest me at the time.

The new band ‘Wolf Corps’ was well received and quickly grew in popularity. They soon dropped the ‘Wolf’ part because it was pretty cheesy and just became ‘The Corps’. The English Oi! influences have taken a back seat to what us Aussies do best – hard and heavy rock n roll. Over the years people have come and gone, and Bevynn, Kev and I eventually filled out the ranks.

We’ve all known each other through gigs and bands over the years, and while we are all from different musical backgrounds we all liked the band enough to join when the opportunity came up. More recently Jordan has left the band, leaving Alex as the sole original member. We’ve just got a new drummer named Jackson in, and we’re looking forward to getting back into writing and playing.

You just released your new album. Are you satisfied with it and how are the reactions so far?
Bevynn: We are really happy with the new album. We have been getting really great reviews from the European and American press so far, we are very grateful for that.
Will: I’m happy with how it’s turned out. It was very difficult to write because we aren’t a professional band, and all have jobs and girlfriends / wives and family to attend to, and we don’t have a huge amount of time to spend playing. We really had to work hard to develop our songs beyond basic ideas, but I think the result was well worth it. Our label Contra records have been very pleased with how the album has been received.

Are there any significant differences with previous releases, not only in terms of music but also in terms of songwriting, recording, etc?
Bevynn: – We recorded Know The Code at Damien Gerards in Balmain, the same studio we recorded Bottle Of Rock and Roll. The studio is like your lounge room so its very comfortable, so the recording went super quick and easy. The sounds we got this time round are a step up from our previous albums.

We also did a fair bit of work in the song writing process, cutting out excess riffs and keeping the song flowing and worked on backing vocals more this time . Plus there is a great pub just up the road which helps a lot!. Beer is apparently good for vocals and chip fat makes you play guitar better.

Will: – I think Know the Code is a natural progression from our previous full length Hold Fast and the following EP Bottle of Rock N Roll. As Bevynn said this time around we spent a lot more effort on the small details and really making some music that we and other people would want to listen to.

Again your album was only released in Europe, is it disappointing you don’t have a label in your own country?
Bevynn: We do have a mate with a small label called Viper Death Lock that released Bottle of Rock and Roll on CD in Australia and is hopefully doing the same with our new release Know The Code. He managed to get us in most music shops but it is quite difficult in Australia. We now have everything up on iTunes too.

Will: It’s not disappointing really. Australia is such a small market for punk music that it’s only natural that a band like ours is largely independent of labels. We’re happy that Viper Death Lock is helping us get our releases out through more mainstream distribution networks but as a lesser known band we’re always prepared to go it alone.

If i’m not mistaken you planned a european tour last summer but you didn’t play. what happened?
Will: That’s partially right. Because touring Europe requires a lot of planning on our part due to distance & cost we couldn’t commit to touring in 2012 because we just did’t have enough booked by the time it came to make a decision.

It seems to us that due to the economic situation in Europe there is a lot more hesitation at the moment to spend on gigs, and compared to our 2008 & 2010 tours we had a lot more trouble getting things planned. So it reached a point where we had to pull out, and wait for a better time to try again. We’d love to come back though! Europeans, buy our records and come watch us play next time! 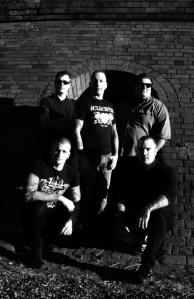 In the titletrack of the new album you sing “he don’t need a scene he does whatever he suits”. Do you feel related to this Oi! & punk scene or are you happy to be an outsider?
Will: – Yes, that’s absolutely the intention of that song, and is our attitude. I don’t think we are necessarily outsiders, but we definitely don’t fit the mould of a typical punk or Oi! band. In terms of success we would probably do better by doing the safe thing of singing about being a skinhead and chanting “Oi!” between verses and dressing the part but that’s not what we’re about. We’re just a bunch of guys playing music that we like and having some fun doing what we do best, singing about booze and girls.

Do you have any closing comments?
Thanks to Contra, Randale, Rebellion, Bandworm, Viper Death Lock and Balasz and Reka the Ninja at Scampkid for the support over the years. We’ll be starting up writing very soon for a new EP, and hope to get back to Europe soon. If you want to keep track of what we’re up to you can find us on facebook. Cheers!

This entry was posted on June 25, 2013 by oioimusicdotcom in Interviews and tagged Australia, streetpunk.