The Class Assassins – The Addiction & The Solution single

The Class Assassins from Canada have been away for a while but after a period of silence the band reformed a few years ago. I always liked their music, but since they reformed i became really enthusiastic about them. 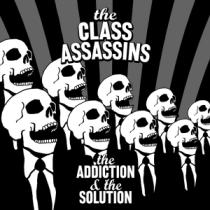 The potential of this band is huge. They come from a streetpunk background with a blue colour attitude but they added a melodic rock’n’roll edge to their music which reminds me to bands as Social Distortion or Reno Divorce. I think even people who are into bands like Strike Anywhere, Rise Against or Propagandhi will appreciate this band.

Earlier this year the band recorded two songs to gain some attention and to show the people they are still here. The first song is called The Addiction and shows the regular Class Assassins ingredients: clean vocals with a raw edge, sing-along chorusses, while the guitar sounds like a streetpunked version of Social Distortion.

The other, The Solution, song is quite amazing. It clocks over 9 minutes and i can’t remember i heard a punk song of this length which didn’t bore me at all! Honestly it took me a few listenings to realise it such a long song.

Even though i mentioned the band name Social Distortion a few times, The Class Assassins certainly don’t sound like a copycat or dime a dozen, on the contrary!

Class Assassins, The – No Justice… EP

This entry was posted on April 17, 2013 by oioimusicdotcom in Reviews.