Many French Oi! bands from the 80ies grew out to cult bands. Oi! fanatics worldwide are willing to pay huge prices to obtain original pressings from bands such as The Herberts, Komintern Sect, Camera Silens or the Chaos En France compilations. These days the French label ‘Une Vie Pour Rien?’ does an excellent job in releasing and promoting the new league of French Oi! 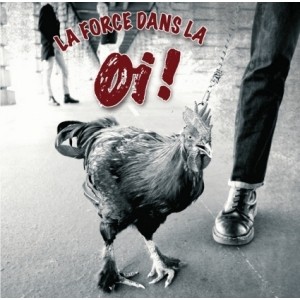 La Force Dans La Oi! presents three relatively new bands and a new song by Maraboots. Maraboots already showed good with their 2011 EP and their split EP with Stomper 98. For already a while i’m repining they should record a full-length, but unfortunately they let people waiting unnecessarily long. Their song Jamais (‘Never’)  featuring Jenny Woo supports my repining.

Next band is Larcin. I never heard of them before therefor i think this is their first release. Mauvaise Habitude (‘Bad Habit’) is a good song, but honestly i have to say that they don’t leave a big impression. The B-side starts with Lion’s Law, a band founded by (ex)members of Komintern Sect, Maraboots, Street Kids and Burning Heads. I’m surprised they sing in English but it works out perfect.

The last band is the biggest surprise for me. The Fanatiques describe theirselves as a group of Templars fanatics, but this description doesn’t cover the content at all. Actually their song No Turning Back reminds me a lot to powerpop and mod revival bands from the late 70ies and early 80ies. The catchy sing-a-long chorusses, the style of singing. It’s great!

I never rate compilations, but i’m pretty sure that people who are seriously  interested in French Oi! music – past or present – can’t do without this release.

This entry was posted on December 14, 2012 by oioimusicdotcom in Reviews and tagged France, Oi!.