The American record label Oi! The Boat scored well with high-quality (split) EP’s by bands such as Perkele, Old Firm Casuals, Last Resort and Noi!se. Now the label started a new series of 7″ compilations featuring bands from the USA. The first volume of the series tackles the south west quadrant of the USA. 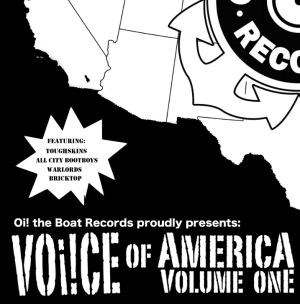 The first band is named The Warlords.  I somehow associate bandnames like these with Scandinavian black-metal or anything like that. But The Warlords hail from Los Angeles and play american styled streetpunk. Reading through the internet i found out they were already founded in 2003 but didn’t manage to release anything yet. Their song Aggro sounds somewhat familiar, but in a pleasant way.

Next on is Bricktop. Also they were founded in 2003 but released two CD’s and more recently an EP. I’m familiar with some of their other recordings and i have to admitt they make a better impression this time. I like the rough voice while the guitarparts remind me to bands as Discipline or The Corps.

The flipside starts with The Toughskins. Not exactly a new band, as they have been around since the early 90ies. But if i’m not mistaken they broke up for a while. I have no idea if they still consist out of the same members as in the earlier days, but they sound different than on their Raised In Anger album from 1995. The music remained more or less the same, but the vocals have lost momentum.

The last band on the compilation is called All City Boot Boys and to me they are the most exciting band on this piece of wax. Earlier this year this ‘razor SHARP’ band released a so-so demo which didn’t made a huge impression to me, but after hearing this song, i’m just happily surprised. Sleeping Where We Fall has it all: an uptempo punk song, a sing-a-long chorus, a good sound and breathes an atmosphere of enthusiasm. I really hope to hear more from this band soon!

This entry was posted on December 7, 2012 by oioimusicdotcom in Reviews and tagged Oi!, USA.