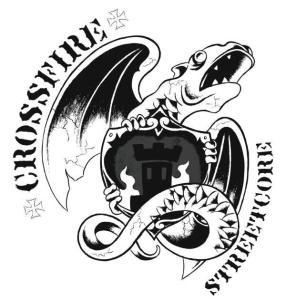 First of all, can you please introduce the band and the members to us?
Crossfire is Max on bass and vocals, Salz on guitar, Mark on Guitar, and me – David – on drums.

No offense, but how is it like to be in a band in Austria? It isn’t  the most flourishing scene…
It fucking sucks! There are barely clubs where you can play, promoters don’t give a shit about local bands and people here aren’t really interested in Austrian bands. There’s no support at all. At least that is what I think. But on the other hand we have a lot of great Oi!, punk and hardcore  shows with international bands here in Vienna.  So if you like going to shows it’s pretty okay here, as long as you don’t play in a local band haha!

To promote your recent EP you released a video. I’m pleasantly surprised that more small bands are into video’s again. How did you finance it and are you satisfied with the result?
We didn’t pay a cent for the video because we did it all on our own.  Max has got a camera, the location was a friend’s basement, and our former guitar player Vale did the editing (thanks again!). Considering that it was our very first video we are very satisfied with the result.

In your band description you explicitly state you’re a non-political band. Why is this so important to you?
We define ourselves as non-political because we don’t support any right wing or extreme left wing ideologies. But we are a very socio-critical band for sure! And we are definitely strictly anti-racist, but we don’t think that we have to sing about it or that we have to use some ‘GNWP’ labels, just because some PC wankers probably would ask us to do so. For us it’s just a natural thing to be anti-racist and anti-fascist!
Although we claim to be non-political, we definitely can’t identify ourselves with todays ‘non-political’ greyzone, because those people love to kiss right-wing asses! Fuck all this “Oi! ain’t red” shit! We are neither political correct nor grey zone!

Your lyrics and artwork breathe a pessismist atmosphere. Do you see the band as way to release anger and frustration or do you also try to reach people with your lyrics?
I would say that the lyrics are mostly about anger and frustration about this and that. May it’s be about some scene, some society issues or about something else… There are also a lot of very personal lyrics like in the song Hard Times for example.  It would be cool to reach people with our lyrics, but I think it’s not really our main intention. The most important thing about our lyrics is that they don’t deal with any cliché, scene bullshit that has been said one million times before.

Concerning the artwork you are right, we also think it’s very pessimistic. But I think it shows pretty well what we think about what’s going on on this planet. The world is raped by greedy vultures every single day!

During the years you shared stage with huge names like Madball, H20,  25 Ta Life. What was your most memorable gig?
The most memorable gig was with Bonecrusher in Vienna in 2006. It was in a small club, and there were not more than 30 people or so, but it was one of the best shows I have ever seen. I can’t remember if we played well or if we sucked, but Bonecrusher is our favourite band and an important influence, so it was a great honour to share the stage with them. They kicked ass!

It’s already three years ago since you released your last full-length. Any plans for new releases yet?
We have two new songs left from the Men Without Faces-session, which we plan to release on another EP. Maybe as a split with some other band next year.  No concrete plans concerning that so far. After these two songs are released, we plan to hit the studio for another full-length again!

Do you have any closing comments?
Thank you for the interview mate! Hope to play in the Netherlands one day! You can check out our band and the new EP on Facebook.
Cheers,
David & Crossfire

This entry was posted on October 30, 2012 by oioimusicdotcom in Interviews and tagged Austria, hardcore, Oi!.