Sheer Terror needs no introduction. Although the band broke up and reformed for numerous times they were never forgotten. Last summer Paul Bearer and the boys released their comeback EP and it was a blast! The band is currently working on a new full-lenght and continues what they always used to do: playing hardcore without any fuss and taking a piss out of the scene. All question were answered by Paul Bearer (vocals).
July 2012 – band website 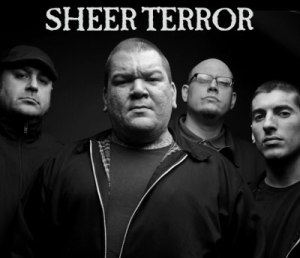 Sheer Terror broke up and reformed several times, yet i really thought last time of breaking up was the final time. What made you decide to come back again?
It was originally to finally tour Japan. I had never gone, but everyone else and their grandmothers had. The opportunity came and i contacted those that i thought could pull this off with me, without looking or sounding like a ‘cover band’. Before we left we headlined the opening night of the ‘This is hardcore fest 2010’ as a warm-up. We played for almost two hours. I talked shit on everyone for a decent part of the show! It’s what i do, i don’t work from a script, i like to communicate with the crowd. I’m a big mouth!

Well, we went to Japan thanks to my brother Uzi and his band, Aggressive Dogs. It was unlike any tour that i’d ever done. Not because it was packed with tons of people going crazy, buying merch, etc. It wasn’t. Some nights were better than others. It was the respect that the Japanese people had for eachother, as a country that really hit home with me. After a few shows i stopped and realised that i had a great band of guys, not only backing me up, but getting along and acting like a band! I called them all into my hotel room, one night, and asked them if they’d want to try writing a song. They looked at each other, and then at me, and said “well, we kinda already did”. It was there and then i knew that it was the right time to bring back my band.

During the fifteen years of your absence the rivalry between New York and Bosten crew and metalcore and emo are the biggest things in hardcore. Is it good to be back?
It’s great to be back because we’re doing everything on our terms. I’m lucky enough to not to have to ‘prove myself’ to anyone but myself. Hardcore will always have ‘drama’ and bullshit because it’s such a spread out ‘scene’. And thanks to the advent of the internet everyone is a critic/blogger/anonymous shit talker. But we have a built-in audience of older hardcore kids, punks and skinheads.

I’m not trying to alternate any of the younger crowd, by no means. But i can completely understand if they don’t ‘get us’. That’s cool. I don’t necessarily ‘get them’ as well. But i’m not going to say they are wrong unless i see a wrong. Then they can take it as they please.

Recently you played in England for the first time. Are there any other places were you finally want to play (South-America? Asia?) or do you just wait and see what offers promoters come with?
England was great!! Finally!!! I’d like to play in Russia, China, Korea, a lot more of Eastern Europe, Ireland, Hawaii… Certain South-American countries… Any place where the government is afraid of their students or clergy. I’m on the fence about. Not because of the fight, but with my ‘luck’ i’ll be kidnapped and forced to read anti-american/imperialist rant, and then beheaded. I look good with my head on, thank you!

Last summer you released a new EP. You are very critical – or not so say negative – about the production of some your older records. How do you feel about the sound of the new stuff?
The Last EP – Spite – sounds great to me. I’m very proud to have had that one released as my “i’m back” record. As time progresses, some of the older records don’t hold up in production as a musician. They are what they are and hold a place in the time and circumstances they were recorded in.

If you’re in a band you’re always looking to sound better. I’m not looking to sound unlike the Saint of Yore. Just updated without trying to fit in to what’s ‘happening’. Of course, production values are going to change with the times, but that doesn’t mean a band has to ‘keep up with the Joneses’ to remain relevant. 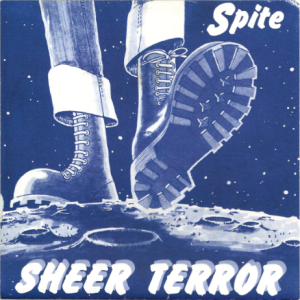 A few copies of the Spite EP got a special treatment and were sold in a Symarip-like sleeve. Are you into reggae music or was it intented to be a tribute to the skinhead cult in general?
I’m a huge reggae/dub/ska/soul fan. Always have been. I’m a skinhead for over thirty years now, ain’t no shame in my game! Patrick from Reaper Records did the Moonstomp cover on his own and it was a pleasant surprise for all of uss. Jason (bass) and i are the only skinheads in the band and we have no fucking problem with that! I listen to a lot of I Roy, Pioners, King Tubby, Lee Scratch Perry, Buju Banton as well as a shitload of 60ies/70ies sould and R&B.

Speaking of classic skinhead bands, you have this record called ‘Old New Borrowed And Blue’. I always wondered if this was a wink to Slade. Ever considered to cover a Slade song?
Very perceptive of you! Yes, without any shame, i stole it from Slade! The one band that can always put me in a good mood! As for covering a Slade song? Shit, where would i begin???

You will release a Sham 69 tribute soon. Can you already announce which songs you choose? When you picked out the Sham 69 songs, did you only looked at the music or also at the lyrics?
I’m waiting for Deptford John (Combat 84) to send me his vocal track. We recorded ‘What Have We Got?, ‘Thats Life’ and ‘Poor Cow’. I chose them out of personal preference. ‘Poor Cow’ has gone through my own re-arrangement and people are going to be befuddled as to what we did to it! You’ll see!

Because of the brutality of the band’s music and the anger you expose while singing you have the image of being angry and tough all the time. But when i read through your lyrics i see quite a huge contrast there. Do you regret this band’s image or do you just don’t care about how people interpret your lyrics?
People are always going to read/see what they want in lyrics. You can paint a house red and they’ll tell you it’s blue. I can get a little wordy or obscure in my lyrics so i’m sure that doesn’t help. But i write for me. I’m not trying to pander any particular audiance when i write. Do i regret the image that’s been thrust upon us (although i have to take some credit naming the first LP ‘Just Can’t Hate Enough’!)? Sometimes, sure. Anyone with half a brain can read between the lines and see i’m coming from a totally different plane than that of just total thugdom. But it’s those without that half brain that i have to keep in check sometimes.

Do you have any closing comments or future plans you’d like to announce?
We are writing a new LP as we breathe. There is no rush. I’m not going to put out a crap album just because i have a ‘name’. I’m going to put out a record that i would personally buy. I ain’t cheated you mooks, thus far… and i have no intention to start now!
Skinhead ’till i die!

This entry was posted on July 16, 2012 by oioimusicdotcom in Interviews and tagged hardcore, USA.