Imagine Sham 69 playing Bonecrusher covers, that would be a good way to describe The Traditionals. The band was formed in Pittsburgh in 1997 and released their fourth full-length this spring. All questions were answered by Dave Harris. 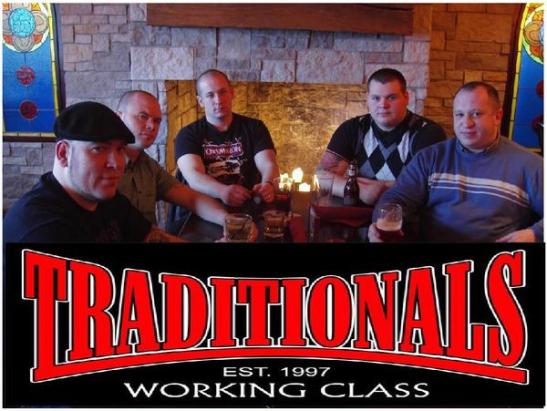 Can you shortly introduce the band and the members?
Yeah, We are The Traditionals. The band started fourteen years ago in 1997 and the current line up is Dave Harris, AJ Falcione, Matt Janitor and Tim Michaels.

How would you describe The Tradiotionals to those who don’t know you yet?
We are a Working Class street punk bands that are heavily influenced by early 80’s style British Punk rock and Oi!

A few months ago you released your fourth record. How are the reactions so far?
The reviews I have read have been good. Some people have the opinion that we should have progressed to some other music than punk rock over the years. The music we write is the way we live and we don’t do it for money or anything like that. Like it or not we play what comes from our hearts and pride ourselves that unlike other punk bands that have been around for as long us, we have not changed our style or sound in nearly a decade and a half.

Your record was released in Europe by Impact Records. Is there any special reason why the record isn’t issued in your home country?
They treat us well. No American label has given us the opportunities they have. We also are loyal because they believed in us. We have put out four CD’s with Impact records and have stayed with them because they have stood by us in the ups and downs since we signed with them in 2003. Impact also has great distro and has helped us to do two tours in Europe since we’ve been on the label.

To promote the new record you toured through Europe. Can you tell a bit more about it?
We played eleven shows in eleven days all across Germany and few shows in The Netherlands and Belgium. We also got really drunk for a few off days in Berlin. We traveled nearly 4000 miles (nearly 6500 km). Three of the shows were with Bad Co. Project (ex Oxymoron) and we also played with bands such as The Agitators from Belgium. The tour was a lot of fun and we got to experience places we might never see on a work mans wage. We have been to Germany before. We played on a tour with Evil Conduct, Hard Skin and 4-Promille in 2006, that was also a great time. In general the audience is not much different. There are a lot of differences in american verse European culture, but I found that we all have our love for beer and good punk rock. That unites us.

A few of your songs deal with typical working class issues as lowering wages, unemployment, et cetera. With the current crisis these songs get more topical each day. Within this context do you value these lyrics more when you sing them live
The lyrics I write deal with our frustrations with society and also having a good time. In my opinion Oi! and punk rock provide the last frontier for a music genre to deal with reality. Too many bands write songs about girls and bubble gum pop rock bullshit. We think that us pointing out the truth about oppressive government and the human and individual rights puts us in a category that not too many bands want to deal with. As you said, you can look around you and see that the world leaders have been feeding us all lies in every country .

The song ‘Adult in a youth cult’ deals with getting older and older and still being a punk or skin. Do you sometimes feel like a stranger cause punk has the image of being a youth cult…
I don’t feel like a stranger really. I was fifteen when I first became a skin. Twenty years later I find myself more into the culture of skinheads than I ever was. The skinhead and punk rock culture have traditionally been youth driven. Now it seems there are more and more that are our age and older that are still in the bands. It is sort of a tongue in cheek poking fun at the fact that a lot of us are “Adults in youth cult and are still looking for the truth”.

Before starting The Traditionals in 1997, you and your brother Joe played in The Sussed. Can you tell a bit more about this band?
My brother Joe was not in the the sussed originally. I started The Sussed in 1991 with some friends who wanted to bring Oi! to our city. We were pretty much the first of our kind in Pittsburgh. Before that it was mostly politically correct hardcore punk and metal bands. We were all punks and skins that listened to ska, Oi! and punk and lived the lifestyle. The Sussed released a CD in 1995 and a 7″ in 1994. We recorded a LP in 1997 and it was not released. At this time there are no plans to release it. The Sussed did do some reunion shows with my brother on Drums in 2003. We may have another reunion at some point. Most of the band members live in different cities now days.

What will the near future bring to The Traditionals? Any plans for new tours or releases?
We have an East Coast tour in the works with the Black Marias from Great Britain for next year. Tomorrow we play a show in Philadelphia with The Old Firm Casuals, Patriot, Murphy’s Law and the Krays. We are also working on writing an album for next year. We have really been working hard latley to polish our sound and write more songs. We intend on keeping the Torch lit !

Do you have any closing comments?
Thank you for taking the time to interview us. We appreciate the support. Hopefully I can buy you a beer someday. Keep the faith !

The Traditionals – Generation Of Today CD

This entry was posted on August 5, 2011 by oioimusicdotcom in Interviews and tagged streetpunk, USA.