The Warriors started back in 1981. Thirty years later they are still around and still one of the finest English Oi! bands. The band is currently more active than ever and expect a new record soon. Questions answered by Saxby.
June 2011 – band website

First of all, can you shortly introduce the band?
The Warriors are Saxby on vocals, Russ on bass, Dave and Andy on guitar and Chris on drums. We’ve all played in other bands in and around Kent, except Dave who has a degree in music.

You’re planning a new full-length. When will it see daylight and what can we expect from it?
We are hoping to get back in the studio later this year, probably September or October to finish the album. We’ve got 9 songs down and want to record 6 more. This album is gonna be the best Warriors album so far and it’s got some powerful songs about today’s Britain. Hopefully be out by the end of the year as a taster we are releasing a 7 track mini album called Condemnation which will be out in July/August.

Your last record is called Unite The Scene. Too which split up does it refers?
It’s not about a split as such as a joining up of punks, skins, hardcore etc etc. A bit like The Business did back in the old days. Let’s stick to gether and fight the real enemy. 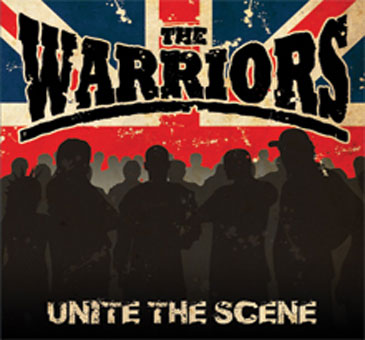 In a new song called Internet Bullies you state that the talk of some keyboard-warriors costed you a few gigs. What’s the story behind it?
We’re sick and tired of cowardly people ringing up venues and posting shit about us and some of our mates bands. Only last month we were classed as nazis by some faceless wanker and a couple of days later were called reds by some other creep. The Warriors are, were and always will be a non-political democratic street rock band who stand for pride and not prejudice. We’ve lost two gigs recently because of this crap.

When people speak of The Warriors they often speak of you as ‘that ex-Last Resort’ band. Does this bother you? I mean, i see parallels in between both bands but i surely think you have an identity of your own.
No, it doesn’t bother us. We kept The Last resort flame going back in the 90ies and now Roi and the guys are back better than ever. We still do a few Resort songs to keep the punters happy and its all good.

And yes, The Warriors have their own identity and do stuff which the Resort might not do such as humour and a bit of ska and now we got two guitarists we are pretty powerful. 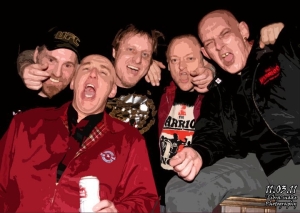 Speaking of the Last Resort. I heard a story that the copyright of the band name is owned by Roi. Is this correct and isn’t it a bit strange the original Last Resort-singer isn’t allowed to use that name anymore?

No not really. Roi owns the copyright to the name so that’s the end of it. We get on really well, we always have and have done a few gigs together.

The band was founded in the early 80-ies, yet it took until 1996 to release your first full-length. Why did it took so long?
The band formed in late 1981 and recorded two tracks on compilation albums, did a couple of gigs and then Roi joined the 4-Skins, Arthur joined The Balham Alligators and that was that until a Last Resort reunion gig. An album was recorded but Roi owned the name, so we went back to The Warriors. The rest as they say is history.

The scene in England seems to be very much alive these days. Not only old bands like Cockney Rejects or 4-Skins have reformed. Also new bands like Booze & Glory and Control do a good job. Are there any other bands we have to keep an eye on?
There’s a new young band from Kent called The Halfwits. They are very young, the oldest is 20 and they remind us of the old days doing it for a laugh. We’ve played a couple of gigs with them and we’re trying to help them as much as possible. Go give them a listen

Do you have any closing comments?
We would like to say thanks to you and everyone who has supported us, come to our gigs, put us up at there house, bought our merch, et cetera. Cheers! We never thought we would still be doing this 30 years later, but we’re enjoying it more than ever. Check us out on our facebook page and look out for our new records there the mutts nuts!! Cheers, see ya at the bar!

This entry was posted on June 7, 2011 by oioimusicdotcom in Interviews and tagged England, Oi!.